I’ll have one order of “Stir-Fried Wikipedia”

In his keynote address at CTIA 2015, Wikipedia founder, Jimmy Wales told a humorous side story about the name “Wikipedia” somehow getting mistranslated into menus at Chinese restaurants (see the included photo). 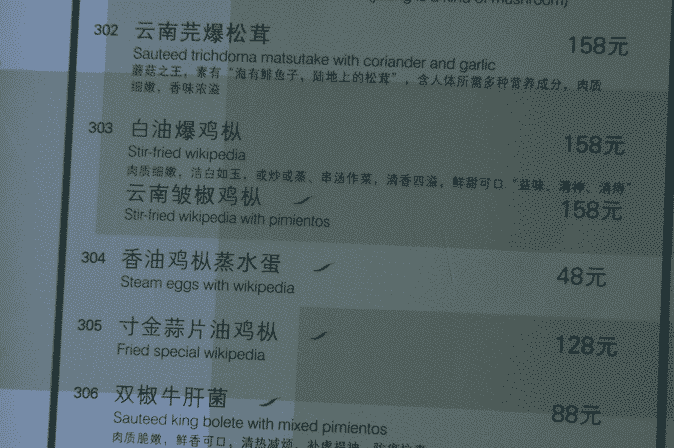 Wikipedia, the web-based, free, editable encyclopedia, contains over 35 million articles written/edited by over 70,000 online contributors in 290 different languages.
So, as Wales tells the story, when he asked a team of Wikipedia’s contributors in China how this could have possibly been mistranslated, they collectively came to the conclusion of “we have no idea”.

A blogger named Jim Benson notes what he describes as a plausible etiology:

“Hey I’m making the new menu, what’s the English name for those flat crispy mushrooms?”
“Um, there isn’t one.”
“Well what should I put down here?”
“I don’t know, look it up in Wikipedia.”
“What?”
“Wikipedia!” 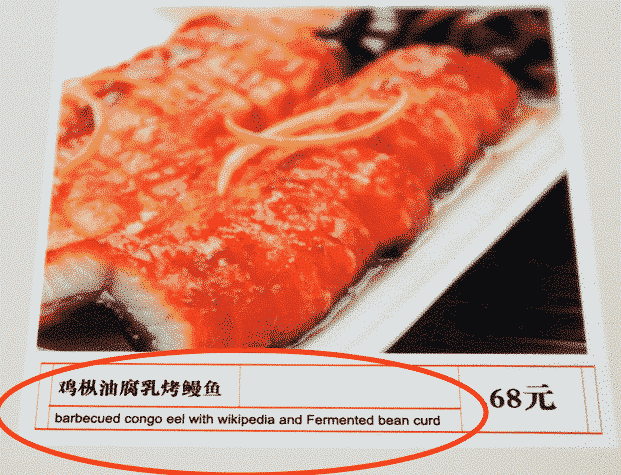 I argue that Mr. Benson’s theory is as good as any. However, it doesn’t explain how other restaurants came up with a similar mistranslation since the one he ate at is not the only one with this mistranslation.
Another blogger, Mark Liberman also calls out a mistranslated use of the name Wikipedia – “barbequed congo eel with wikipedia and Fermented bean curd.” While it sounds like a great deal at only 68 Yuan, I simply don’t think I am adventurous enough to try an order of “congo eel” even if this place makes the best tasting “wikipedia” in all of Beijing. I don’t order eel sushi and I am not going to order “congo eel” either.

Blogger Chris Leo posts others that are funny too – the following are my five favorite. However, you can use Google to find a several more side-splitting translations, but beware, many contain vulgar language.