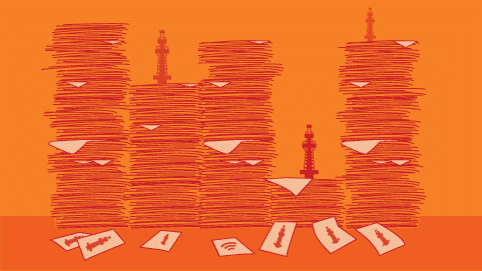 Wireless industry project managers and site acquisition vendors are no strangers to the need for title review, whether with respect to an Informational Title Commitment (a.k.a. Preliminary Title Report), Owner and Encumbrance Report, property profile, or otherwise. But if you’re working a site in states such as Oklahoma, Pennsylvania, Texas, Kansas, or Ohio[1], you may be noticing that your title reports are costing more and taking longer. What the frack is going on?

Our title company contacts advise that they are being inundated with requests for title report orders placed by the hydraulic fracturing[2] (commonly referred to as fracking) industry. Given the current levels of fracking activity across the U.S.,[3] in some respects it’s no surprise that hydraulic fracturing is affecting local commercial and government resources in these markets. Just as the carriers and tower companies need to understand property ownership and potential title issues[4] in connection with cell sites, the fracking industry is performing similar research in connection with well permits. Unfortunately, this strain on local resources has affects outside the mining sector. In some areas of the country, we’ve seen the costs of title reports double over the course of a few short months. Additionally, because title reports are generally produced on a first-come, first-served basis, title report orders are being placed in very long, and ever expanding queues. Title product delivery has been estimated at 12 weeks in North and South Dakota. In Pennsylvania, it can be difficult to get any delivery estimate. With network infrastructure budgets being continuously tightened and deployment cycle times falling under increasingly levels of scrutiny, what the frack can you do?

For better service, contract with the national level of a title company that has a local office in the jurisdiction. Also, diversify your resources by having at least one alternate title vendor, especially one with specific expertise or a proven track record in the area. However, do your homework. With title companies merging and consolidating, certain well‑known brands (Transamerica, LandAmerica, Ticor) have merged into, or are now affiliates of, the four largest title company families: Old Republic, First American, Fidelity and Stewart.[5] Each of these families relies upon its own internal network[6] to serve as a clearinghouse for title research across the country.[7] However, national title companies sometimes contract with the same local agent, so make sure you find vendors that don’t use the same local officer. Unfortunately, if you are working in a jurisdiction with only one agent authorized to research or prepare title reports,[8] you may have no choice other than to wait patiently for your report, checking in periodically with the title company, and hope your client understands the reason for the delay. (Good luck with that.)

On the carrier/tower company side, counsel should take care to ensure that the title reports meet the requisite ALTA[9] or comparable[10] industry standards. Otherwise, you may receive a purported “title report” that fails to note any easements or other interests in land not because there aren’t any in the public record, but more because the researcher didn’t research them at all. One resultant risk – the absence of reported easements may effectively render your survey meaningless.

Whether or not you support fracking, it’s undeniable that hydraulic fracturing can bring more jobs and more people to remote and often rural areas of the country. Ironically, this likely INCREASES the need for new or enhanced network infrastructure in the area. These folks may be relying on mobile phone coverage for safety, information, or even just to connect with loved ones. It’s unfortunate that the title delays we are seeing may potentially impact the wireless industry’s ability to provide service. For the immediate future, it may be necessary to build in the extra title research time into deployment models in affected markets.

[2] Hydraulic fracturing is a technique that involves drilling into the ground and sending a high-pressure mixture of water, sand, and various chemicals to release the gas and oil from shale rock. While fracking has revolutionized the energy industry, it has also prompted environmental concerns due to the use of large amounts of water and the worry that any potentially carcinogenic chemicals used in the process may escape and contaminate groundwater around the site. For general information on fracking, see http://www.bbc.com/news/uk-14432401, visited March 19, 2014.

[4] Depending on the title product ordered, title reports can establish matters such as ownership of the property, access rights, and liens and encumbrances recorded against the property in the public records.

[6] These networks are commonly referred to in the title industry as NTS (National Title Services) or NCS (National Commercial Services).

[7] We understand that Lawyers Title transactions are now serviced by Commonwealth Land Title Company, an affiliate of Fidelity, all of which utilize one national distribution network.

[8] This is the case, for example, in many areas of western North Dakota between Williston and Dickinson.