Why are Cell Site Leases Changing? 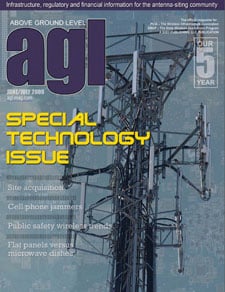 Most people don’t like change. It often makes them wary or uneasy as they contemplate what comes next. For the most part, wariness of change is merely a fear of the unknown – like being in the dark. In Md7’s conversations with tens of thousands of landlords about the changes being made to their cell site leases, we have often explained that in the telecommunications industry where continually advancing technology is central to its operations, change is not only a reality, it’s a necessity. Over the years, my colleague, Danny Ulibarri, and I have identified landlords’ top 10 most frequently asked questions about why their lease is changing. Take a look and see if any of these questions have been on your mind — and if Md7’s insights as wireless tenant representatives help illuminate the issues.

1. Why would the carrier want to mess with the tallest site in town?
As telecommunications technology evolves, so does the definition of “the best site in town.” As I mentioned in a previous AGL article, contrary to popular belief, the Empire State Building does not offer the best coverage in Manhattan. One high site can’t handle the millions of calls made each day in New York, nor can it accommodate the bandwidth needed to run voice communication, video, email, music, photo storage and more. In other words, taller is no longer better. Today’s network relies on a greater number of low elevation sites to accommodate the growing number of users and the bigger bandwidth requirements necessary to meet technology demands.

2. Why should I compromise my rent when I have the best site in town?
Landlords often think that their site is more valuable because it is in a high-traffic area. Or it’s the tallest. Or it’s centrally located. As noted above, advances in technology are redefining what makes a good site. But further, as cell sites come closer to the ground and closer to each other, carriers are less particular about their location. This flexibility combined with an increasing ability to use non-typical cell sites (such as light poles) creates a competitive environment that drives cell site rents down. The landlord who once had “the best site in town” must now acknowledge that carriers have many viable options to choose from.

3. I’m happy with the way my lease is. Why does it have to change?
The industry itself is changing the way it does business, in particular in its efforts to control operating expenses. There is a “perfect storm” of market dynamics compelling tenants to take immediate action: 1) subscriber saturation, 2) decreased revenue per subscriber, and 3) increased cost per user thanks to escalating operating costs and ongoing investment in network infrastructure to accommodate increasingly high-tech services. Escalating expenses have become a number-one priority for all carriers. Cell site rents are one of the largest expenses so it’s no surprise that carriers have focused on potential savings initiatives in this area. What’s more, their scrutiny has revealed certain inequities in what they pay for space versus what more traditional tenants pay. For example, what a carrier pays for a 250-square-foot rooftop space usually exceeds what an interior tenant is paying for a more premium space that includes building amenities and services. Regarding tower leases, the inequity arises when the carrier rents space on a quarter acre of land and pays a monthly fee that is equal to what it would cost to purchase an entire acre outright. A good deal is only good when it works for both parties. In this case, tenants are looking to attain a better level of cost efficiency and equity in their cell site leases.

4. Why won’t you pay me as much as the other carriers on my tower?
It is actually this mindset that helped create the problem carriers are facing. Compelled to expand their networks, tenants once paid higher rents in a market where speed to market and coverage were a priority. While tenants traditionally competed with each other for the best sites, the market dynamic is beginning to shift and now landlords are competing with each other to keep their tenants. What today’s tenants are competing for is operating efficiency. Escalating costs and decreasing revenues have resulted in well-publicized mergers and acquisitions, so carriers are more motivated than ever to right-size rents. Tenants are reviewing their networks and reevaluating how well the lease agreements meet their economic and technological initiatives. As tenant representatives, our company alone has personally contacted upwards of 20,000 landlords on behalf of the carriers, which is only about 10 percent of the market. It’s just a matter of time before you get a call from every carrier wanting to reassess their lease.

5. Why aren’t I making what the guy down the street is?
This is a conversation about average rent versus market rent, which I addressed in great detail in the January AGL. For years it has been said that the going rate for a cell site lease is roughly $1,500 to $1,800 for space on a tower or rooftop and $500 to 600 for ground space to build a tower, give or take whether it’s a rural or urban location. But this dollar amount represents the “average rent” that tenants were willing to pay in yesterday’s market, where speed and coverage were paramount. Today, carriers are pursing real market rates for cell site leases, which is not what another tenant paid down the street— it’s what the competing potential landlord across the street will accept. Cell site leasing has become a competitive marketplace, and you have to decide if holding fast to your price is worth the possibility of losing your rent entirely to the guy next door.

6. Why should I deal with this when my local carrier representative said not to worry?
Carriers are big companies with regional and national expectations and initiatives. The national executive charged with maintaining operating efficiency isn’t necessarily in communication with your regional representative. Local reps keep the wheels turning while critical assessments made at the corporate level dictate new direction. It’s through this high-level direction that companies like ours are often tasked to contact landlords on behalf of carriers to discuss potential changes to the network in a particular region. If you receive a call from a tenant representative, be sure they are authorized by the carrier to discuss your lease. Md7 readily puts doubtful landlords in touch with our corporate contact to confirm the validity of the carrier’s intentions.

7. Why would the carrier want to change the lease when they just renewed it?
While headquarters is strategizing its forward-planning objectives and considering the fate of tens of thousands of sites, local managers are conducting business as usual in their corners of the world. The fact is, because of the carrier’s large cell site portfolio, a monthly report is automatically generated to prompt lease renewals, independent of what changes may be brewing at the corporate office. A directive from corporate overrides any auto renewals initiated by the regional office.

8. Why would the carrier be renegotiating my lease — it’s fairly new?
Given the increased competition and today’s economic environment, tenants are changing leadership, strategies, and operating plans. Every decision (even if just recently made) is being reevaluated. Additionally, mergers and consolidation create redundancy and realignment. New technology has necessitated different requirements of cell sites that may mean more, less or changing locations. In short, the industry is in constant flux and carriers must be responsive to it — even if it means re-doing. It can be a very fickle business. When it comes to cell sites, these days there’s no Mr. Right. Just Mr. Right Now.

9. Why do we need to change my agreement when the carrier was just here performing maintenance on the site?
Carriers have made a multi-billion dollar investment in their respective networks. In fact, according to the CTIA (International Association for the Wireless Telecommunications Industry), wireless companies have invested almost $190 billion in capital since the introduction of the national regulatory framework, not including tens of billions paid to the U.S. Treasury for spectrum —the bandwidth necessary to accommodate the advanced technology of services the market demands. It takes constant vigilance to keep up with consumer demand for more and more services. For example, about 56% of mobile devices are already capable of browsing the web. Several carriers are now spending billions to build the new 3G and 4G networks that accommodate these services. The point is that whatever tomorrow’s plan may be for the network, it has to work today. Carriers are going to protect their investment in each cell site until the minute it is terminated. As mentioned above, the regional office is charged with keeping their corner of the network up to speed until corporate determines which sites provide the most viable, long-term, lower-cost alternatives.

10. I have a 30-year lease!
Actually, a typical lease is written for a five-year term with up to five renewals, totaling 30 years. Tenants may opt not to renew at each term. But more importantly, many landlords don’t realize that the typical lease includes clauses that enable the tenant to exercise their option to terminate with as little as 90, 60 or even 30 days notice. While the typical tenant prefers to remain for a full thirty years or more, the lease may not be flexible enough to meet the ever-evolving cell site requirements. An equally important aspect of the carrier’s initiative to update leases is to upgrade the lease language to provide operational flexibility for the long-term.